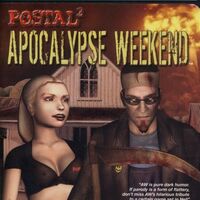 Political correctness gets the middle finger.

And here we are again, beating the metaphorical dead horse on the subject of controversial gaming, preferably with as much juicy spillage as possible to keep us on topic. As you may remember, Postal 2 was controversial, but not quite GTA controversial. Where Rockstar’s long-running series was clever crime drama and social satire bundled into one, Postal 2 was about toilet jokes and being offensive for its own sake. It’s a middle finger aimed at political correctness, and there’s nothing wrong with that.

Postal 2 is a fairly non-linear game broken into five days, each of which can take an hour or more to complete. As the Postal Dude, you receive mundane tasks to complete on each day, like “Buy some milk,” “Cash my check,” or “Return library book”. The biggest laughs come from completing these tasks, because most involve standing in line. It’s funny because it’s so rare that a game gives you such a boring means of achieving goals. The alternative solution, in almost all cases, is to whip out your gun and lay waste to the entire room.

But the combat is simple and predictable, and indeed this is where the game is at its weakest – by any stretch, Postal 2 is a garbage first-person shooter. You end up unloading a clip into each person until they fall into a heap on the ground. And whilst the weapons themselves are creatively funny, none of them have that ‘bang’ to make the game’s shooting portions actually fun.

Thankfully you do a lot of free roaming in the game’s town in between the linear shooting levels, and the town itself gets progressively larger as the days go by (with new areas being continually unlocked). Paradise, Arizona is full of people walking around and doing their own thing, which generally involves cursing at you, or, when you’ve angered them, opening fire. Or vomiting around corners. Or screaming in terror when you go on a psychotic rampage with your shovel.

Look at them milk cannons!

The AI in Postal 2 is very cool. The cops patrol the streets and, unlike every GTA game out there, actually jump to your aid when you’re attacked by rude NPCs. Brake the law and they’ll naturally haul your ass to jail, but usually hiding out of sight for a few minutes is enough for things to cool down. The general behavior of the AI overall is quite funny. Get in front of the line at the store and everyone flips you off, with the cashier asking you to ‘please go to the back of the line’. Walk around with your pants unziped and you hear giggles. Give doggy treats to a stray mutt and the pooch will follow you around for more.

The variety of actions is impressive, as are many of the character animations, and the whole “living world,” feeling is a highlight. You can go and barge into people’s homes and steal their stuff, and murder their occupants. You can visit the Paradise Mall and use money to buy pizza, ammo or gasoline (no questions asked). You can set objects and people on fire and piss on their charred remains for shits and giggles. You can smoke crack for hitpoints, and get addicted.

Use cats as tactical silencers? No problemo.

Meet Krotchy, the hottest toy you can buy.

On the box it says the game’s “only as violent as you are”, and on some level this is true. Some tasks allow for both a peaceful and violent approach, but you can still finish the game even if you kill every innocent in sight. And killing everyone in sight is sometimes hard to resist in Postal 2, simply because few games are as much fun to explore your inner sadist and go on random killing sprees.

Unfortunately, each area is small and packed with ‘load zones’. Loading can take 1 minute on older machines, and the waiting can get a little frustrating. Maybe that’s intentional. The entire point of the game is to hand you all of these minor frustrations as a sort of justification for “going postal.”

Even with all its smaller flaws, Postal 2 was massively bashed in the gaming press, some deeming it as ‘the worst game ever’ – see this thread from 2003. This is patently false, since as poor as a shooter the game might be, there’s still a lot of cheap humor and dumb fun to be had here.

IMPORTANT: This is a download button.
Please READ THIS before downloading!