If the phrase'Might And Magic' seems familiar, it's probably because it has been on the boxes of at least eight PC games to date. Might And Magic I, II, III, Vand Wwere first-person hack-and-slash role-playing games, each set in the same Dungeons & Dragons-style fantasy world. We didn't think a lot of them -Might And Magic VI scored 59 per cent in - but it didn't stop Ubi Soft coming up with Might And Magic VII, which is due for release soon.

Meanwhile, the other two games, Heroes Of Might And Magic I and II, are set in exactly the same fantasy universe, but the key here is strategy rather than role-playing. Combat is between armies, rather than individuals, and the game centres on exploring, recruiting armies, building improvements to your towns and scouring the map for treasure, which belongs to the first player to snatch it.

Town buildings boost your armies or increase your gold or precious mineral resources; most can be upgraded at least once -often more. Treasure can be gold, crystals, gems, mercury, ore, sulphur or wood, or extra spells, skills and artefacts with which you can equip your heroes.

There are dozens of shrines, temples and wandering characters on the map, many of which can add one of the game's 64 spells to your hero's book, or train him instantly in one of the 28 secondary skills available, which come in basic, advanced and expert guises. Ballistics, for example, enables your heroes to attack towns with catapults. Others boost spell power, earn additional gold and even recruit dead enemies from the battlefield to serve as skeletons or zombies.

Routine movement and exploration in Heroes 3 is carried out on the two-dimensional overhead adventure map with an icon bar to the right. From here, you can access any hero or town under your control. When the fighting starts, the game switches to the combat screen, an abstract, hex-divided battlefield with more than just a passing resemblance to SSI's masterpiece, Fantasy General.

Popping up in between are the town and hero screens, where you actually make the decisions, swap troops and artefacts from one hero to another, trade various items on the free market to balance resource production, and add town buildings. The screens are well-planned and neatly designed. A single click - never more than two - is all that's usually required to move from one screen to any other.

Your objective in Heroes III is to build bigger and better armies so you can dominate the map, take over things like sawmills and gold mines, and wipe out the opposition. Disappointingly, there's very little diplomacy or negotiation in this game - it's kill or be killed.

We Can Be Heroes

Single-player mode gives you the choice of one of 42 predefined scenarios or one of three initial campaigns.If the bundled scenarios become a yawn, there's a map editor, which enables you to create maps and new scenarios for up to eight players. You can multi-play over a network, by modem, over the Internet, hot-seat or linked by a null modem serial cable. Expect to do a lot of waiting, though. It's a turn-based game, after all.

You start Heroes III with a town, a hero and a small army of creatures under your command. There are eight different town types, including castle, fortress, rampart, dungeon, inferno, tower, stronghold and necropolis, each producing seven different troop types from the 128 types available. Start with a rampart, for example, and you can recruit centaurs, dwarves, wood elves, dendroids, unicorns and green dragons. Dungeons are limited to troglodytes, beholders, harpies, medusas, minotaurs, manticores and red dragons.

Heroes come in 16 flavours and range from bog-standard fantasy fare, like knights and wizards, to more exotic characters, such as beastmasters and necromancers. Each town supports only two hero types: ramparts, for example, attract druids and rangers, while castles have knights and clerics. Not that you can't recruit other hero types - it's just that they're less likely to appear.

The most irritating feature is that you have to choose one of the 100-odd pre-defined heroes in the single-player scenarios, rather than being able to 'roll your own'; in campaign mode, you get no choice at all. Whatever happened to role-playing?

If you move your hero on to an enemy, you immediately activate the battle screen. Your troops -seven units at most - are set out on one side, witn the enemy on the other, and in the middle are randomly placed obstacles to liven things up. The fastest troop types move first, and they can either fire ranged weapons or move close up for hand-to-hand combat. Unfortunately, that just about sums up the range of strategies on offer.

With seven a side and roughly equal forces, it's virtually impossible to find a winning strategy. If you have more ranged fire units, like archers, you can stand off and whittle down the enemy, but that way you lose more of your own ranged fire units to counter-fire, and these units tend to be harder to replace and recruit. A hero with good combat spells can make a small difference but, in the end, the battles rely on luck more than skill. As always, whatever gods there are in the Might And Magic world are on the side of the big battalions.

Finding the right strategy on the adventure map isn't easy, either. You can't build new towns or fortresses, and once you've cleaned up the freebies you can only spread outwards.

There's nothing groundbreaking about Heroes III. Okay, it features 16-bit colour at 800x600 resolution, but although there's plenty of detail on the adventure map - and too much animation -it still looks somewhat dated. Mind you, it does have two levels the surface and the underworld which adds to the variety of the gameplay.

The big changes from Heroes 2 are to the game system itself, where there are bigger maps, more unit types, more spells and improved combat. Existing Heroes fans will be well chuffed. For many strategy gamers, it will seem inflexible and a bit too shallow, especially when compared to other games on the market.

And while it's often compelling enough to force us into 'one more turn' mode, I just can't for the life of me work out why.

Living In A Fantasy World

Three small steps for you, one giant leap towards success in the game

When you start a game, you usually find yourself with a hero, a town and some troops. The first thing to do is explore the area and grab whatever resources and buildings are within easy reach. Your hero, a knight, has 80 pikemen and 4I archers, so he's well-equipped to take care of himself. Note the four ships, which can be used for transport.

When your hero has finished moving, go straight to the town screen. Each building in the town has a function, and is highlighted when you move the mouse over It You can hire a limited number of extra troops In the town, and another hero or two to lead them. The more the merrier, because each can explore and Hag' mines and buildings.

Level One knight Christian starts with a balllsta and a healing tent But he's weak In spells, so you need to send him off to earn experience and improve his performance Most treasure items can be turned into experience, and entering some buildings gives you extra skills or bonus experience It's a good idea to let only the main man enter buildings and interact with neutral creatures, as he then gains the points. Some heroes should be hired just for exploring at first You can always develop them later if needed.

The most significant change in Armageddon's Blade is the addition of the Conflux, bringing the total number of alignments in Heroes of Might and Magic III to nine. The town is themed around classical elements, and includes other creatures to round out the selection. Six new campaigns were included, one acting as a continuation of the base game's storyline, with the other five revolving around adventures taking place in the same fictional world. Over 35 single scenarios were also added.

Returning as non-aligned units, several creature types from previous Heroes games make an appearance. These include Peasants, Boars, and Halflings. The expansion also introduced some new non-aligned creature types, such as the powerful Azure Dragon. Eleven new campaign heroes and two new artifacts – Armageddon's Blade and the Vial of Dragonblood – were introduced as well. Several new map objects, including special quest towers that only allow passage if the hero meets certain criteria defined by the author of the map, also appear here for the first time.

A random map generator included with the expansion allows players to create random maps using a variety of customizable parameters. Finally, a standalone campaign editor packaged with the game allows for the composition of new campaigns from individual scenario maps.

Only one of the six new campaigns available in Armageddon's Blade directly concerns the main storyline. The events of Armageddon's Blade immediately follow the events of Might and Magic VII: For Blood and Honor. As the kingdom of Erathia struggles to rebuild following the Restoration Wars, the Kreegans of Eeofol launch a surprise invasion. Already war-weary, the forces of Queen Catherine are no match for the formidable Kreegan army.

Heroes of Might and Magic III: Armageddon's Blade System Requirements 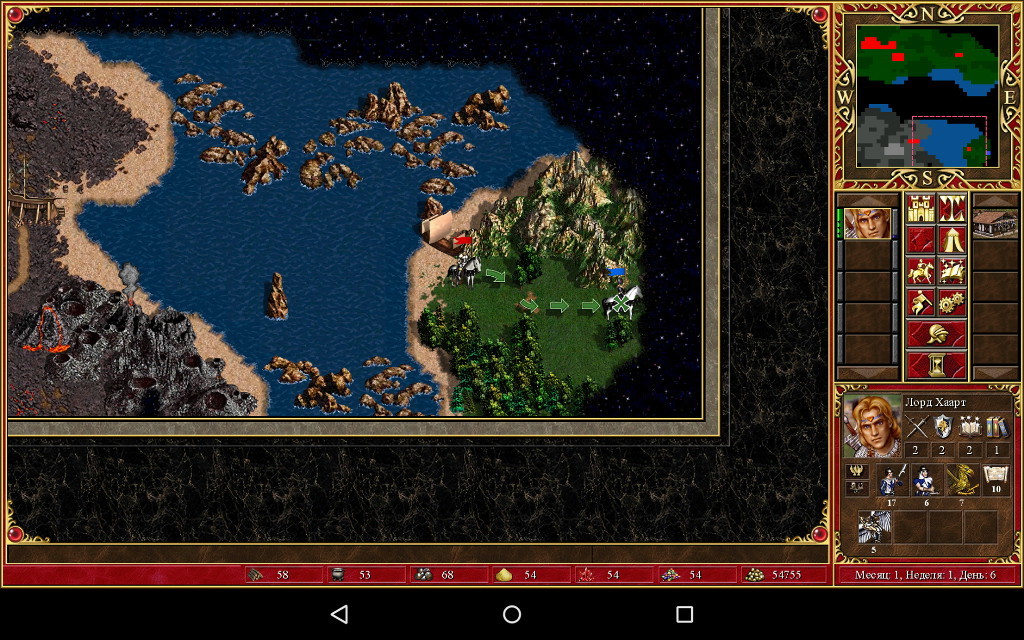 All games from the serie 'Heroes of Might and Magic'

(0) Comments on 'Heroes of Might and Magic III: Armageddon's Blade Full Version'